It’s been a while since I’ve had to do research on a food item I’ve eaten. Quite frankly, I was happy to go down the rabbit hole and emerge in Lanzhou. Growing up in Vancouver, my Chinese dining experiences mainly consisted of Cantonese, Shanghainese, and some food from Hong Kong and Taiwanese cafes.

Slowly dishes from other cities and provinces of China are becoming more popular in the Lower Mainland. Having an obsession with noodle soups (#noodlehabit), the Lanzhou Beef Noodle soup (LBN) was a bit of a revelation.

The lightness of the broth surprised me as I took the first sip of LBN. To be honest I went into the new-ish Chi Men on Denman blind. There’s not much about the eatery online except for a few pictures, which reminded me of a hipster ramen place in Portland. 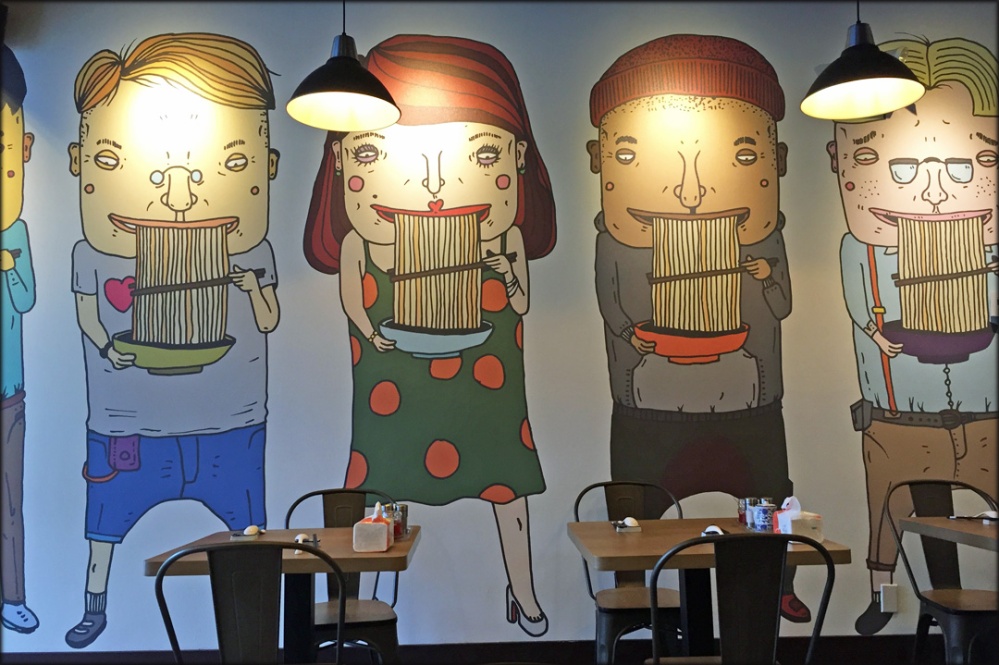 When I saw beef noodles on Chi Men’s menu I automatically assumed it would be similar to Taiwanese Beef Noodles. Well you know what they say about the word assume. Beef noodles from Lanzhou are not the same.

The broth for the LBN (called traditional beef noodle soup on the menu) was light, faintly tasted of daikon, seasoned well, savoury, and had depth. It reminded me of a clear pho broth without the strong cake spices tastes.

I did ask the staff to omit the traditional chili oil due to my heartburn issues, so this soup would normally have a spicy kick to it.

The noodles are unique too. They are made at the eatery, although not hand pulled as per tradition in Lanzhou. Instead the strands are cut to specific widths, ranging from 1.5mm to 2.0cm.   I opted to customize my bowl with the 0.5cm width. The noodles were chewy, slippery and slurp worthy. 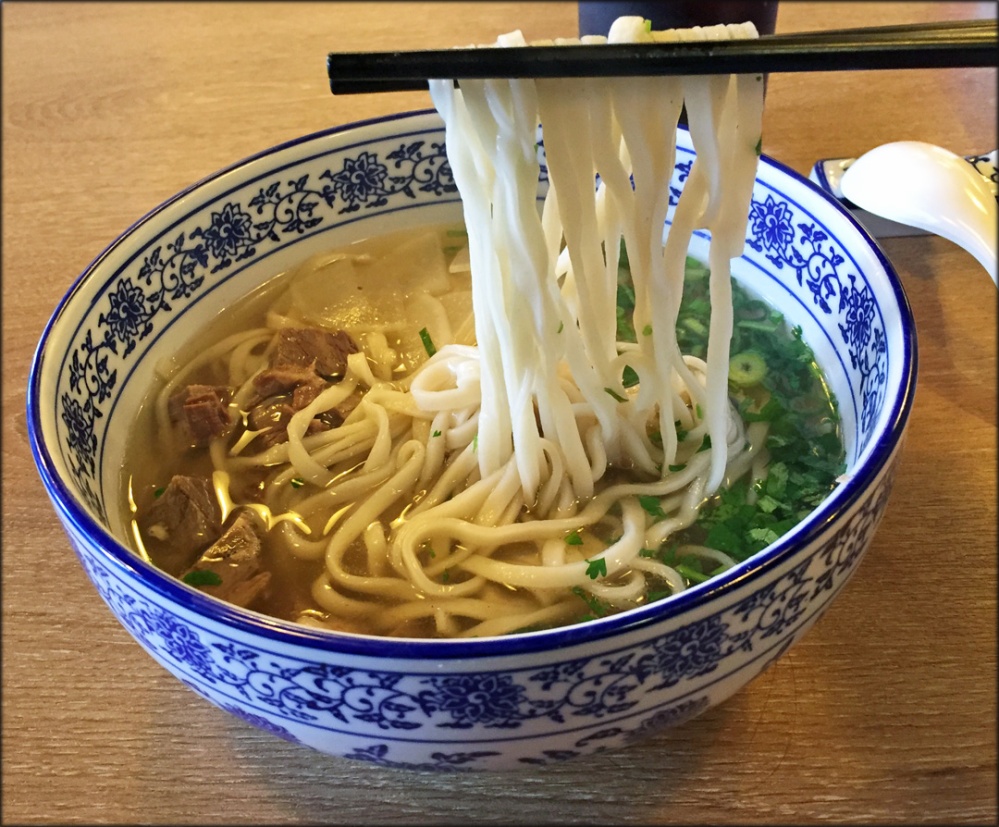 The cubes of beef, slices of daikon, and chopped onions and cilantro gave the dish more flavour. This simple bowl of noodles was great.

I also ordered two grilled garlic butter spot prawns to make my meal more substantial. Unfortunately, local spot prawns are out of season so the texture of the meat was mealy. However they had a good garlic taste and char.

I was so impressed with my meal that I returned with Grayelf and Dennisthefoodie for a second dinner. For Dennis’ perspective on this dinner, click here. 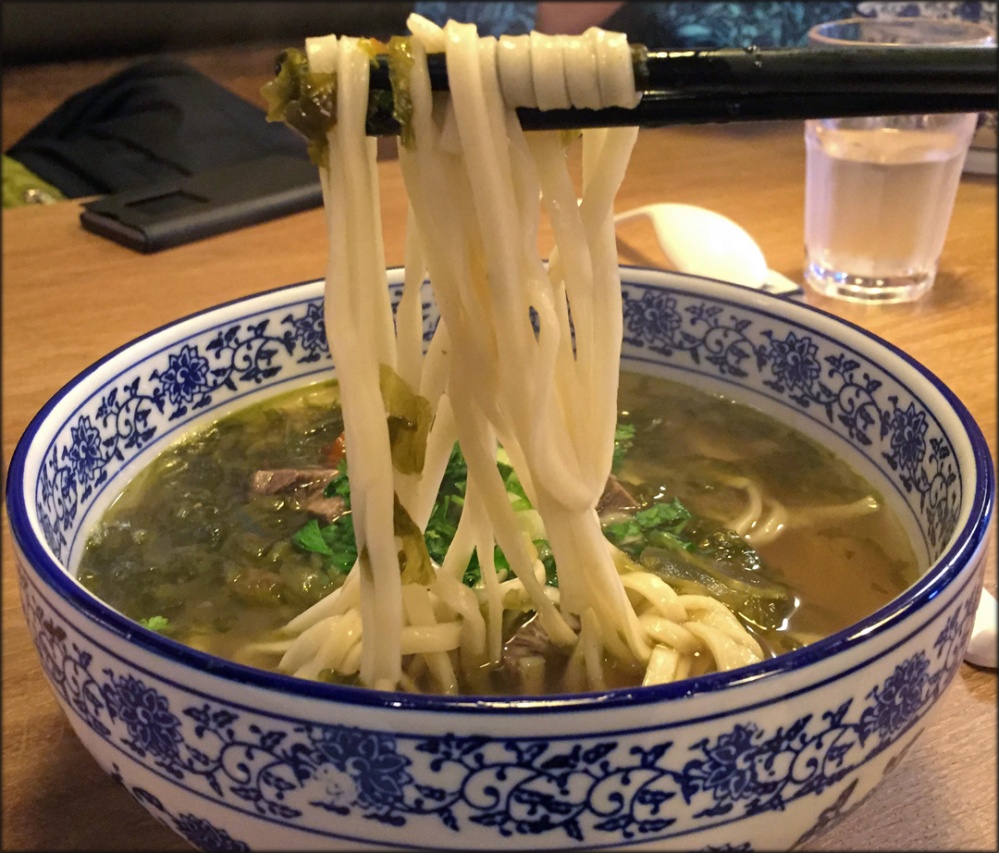 For those who are spice adverse like me, there are pickled hot peppers mixed into the vegetables, which gave this soup a slight kick.   I enjoyed this soup even more than the LBN I had previous.

With more mouths at the table, I was able to try more BBQ items along with my noodle soup. The table ordered Chinese garlic bread, the foot long squid, and the BBQ eggplant.

The city of Lanzhou is located in the middle of China, along the ancient Silk Road trade route. As a result two of the extra side dishes ordered contained an abundance of cumin.

The Chinese garlic bread was grilled mantou with cumin and chili powder on one side and minced garlic on the other. 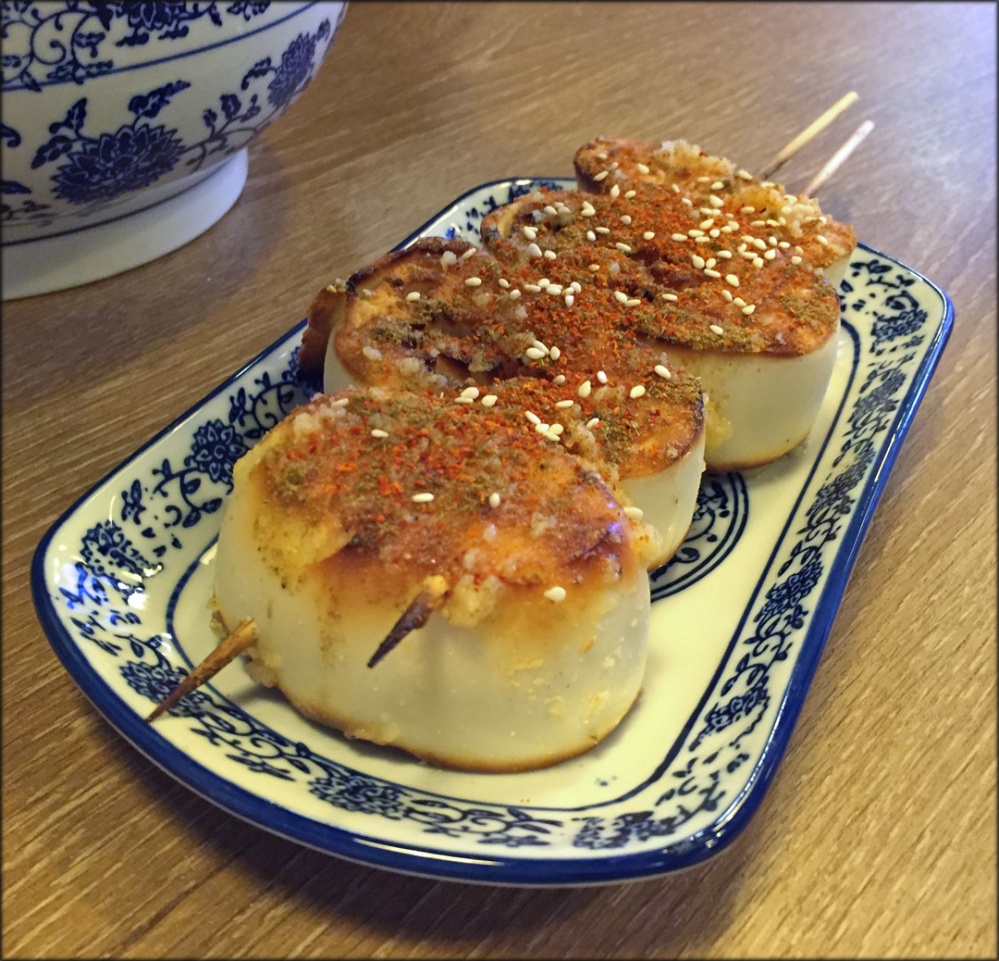 The bread was crisp on the outside and soft on inside. These were addictively good and fun to dip into our broth. 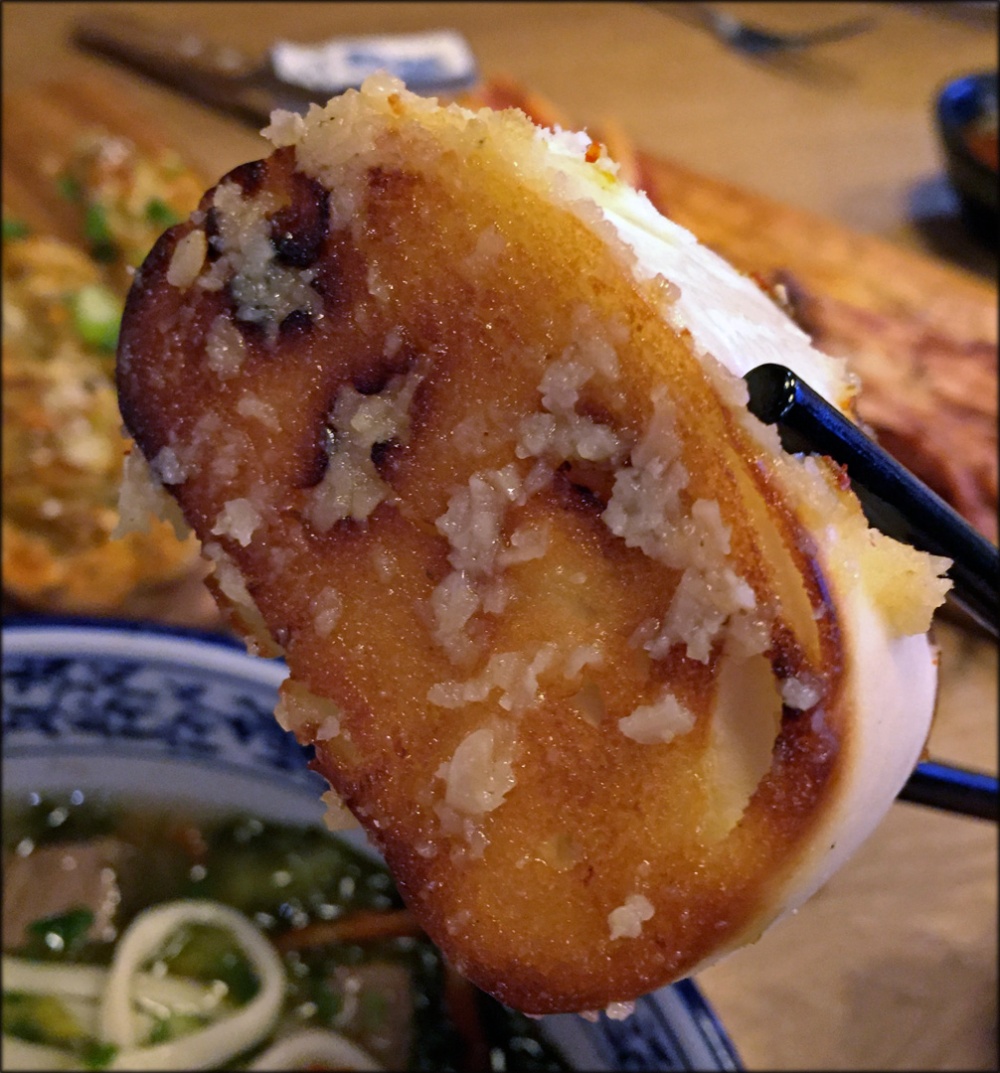 The alien looking foot long squid was tender and simply salted. A dish of sweet chili sauce was provided but I didn’t use it. I thought the squid was fine on its own. 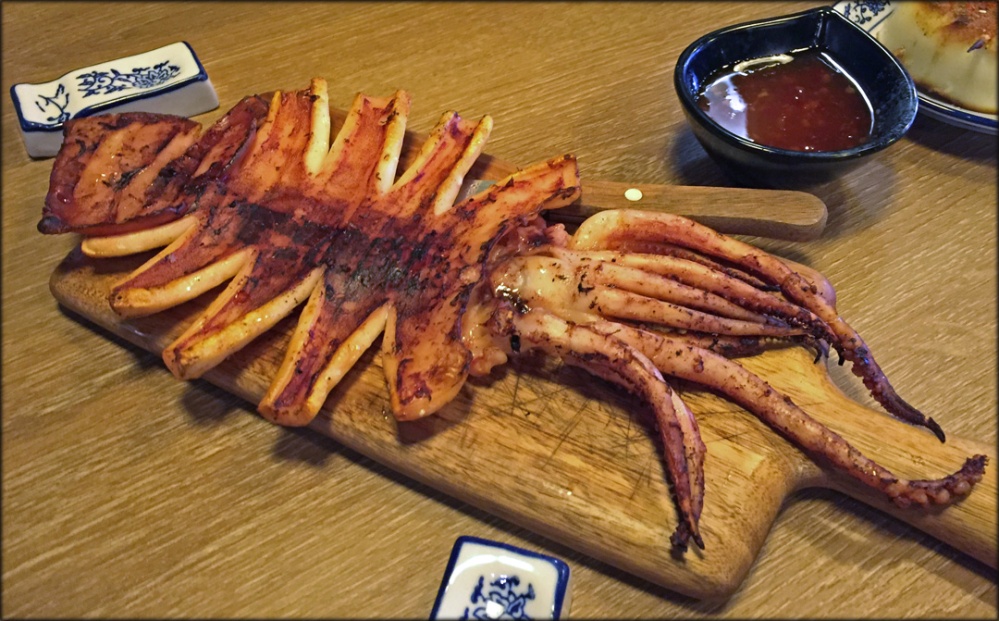 The BBQ Eggplant had the same cumin and chili powder as the grilled mantou. The eggplant was soft and creamy. The spices were the main taste of this order. 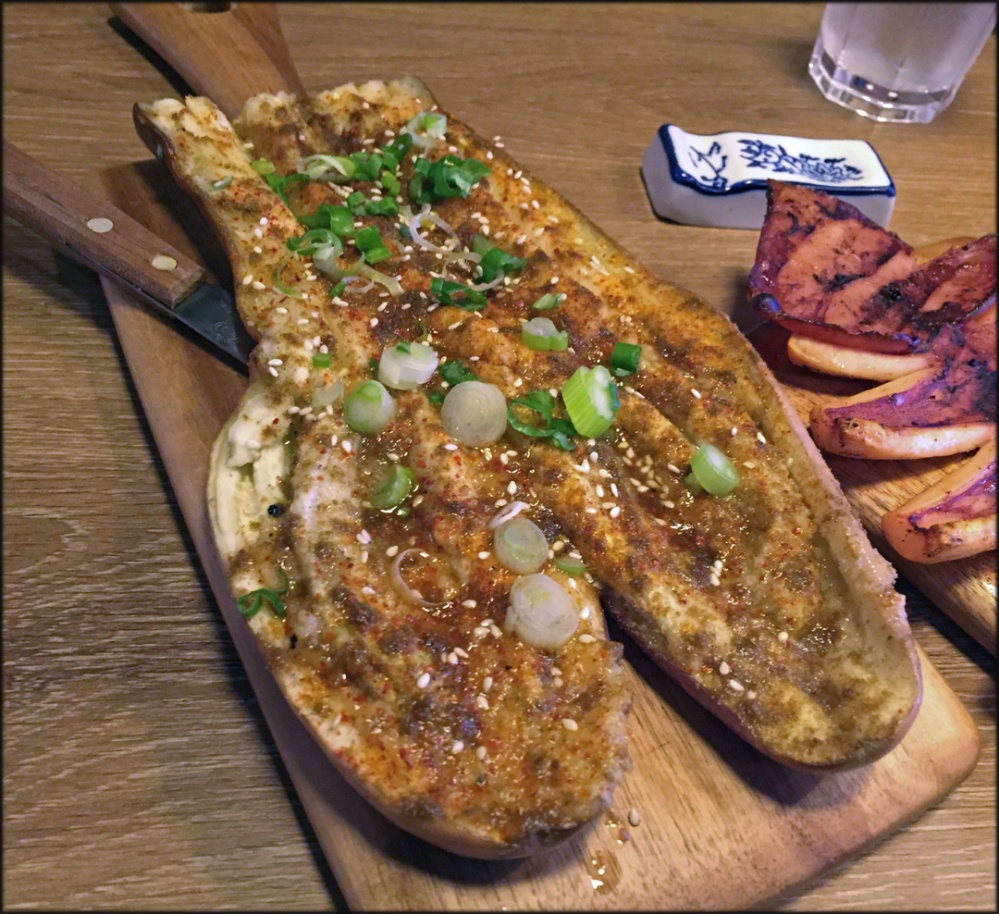 Overall I liked all side dishes we selected and would have them again.

From the two visits, I can say the food at this new Lanzhou Chinese West End eatery is simple but executed fairly well, and delicious. It’s a nice change of pace if you want something other than ramen if you are in the area. The comforting and hearty noodle soups and BBQ items Chi Men serves up will be a perfect antidote for the impending Vancouver rainy season.

Extra Curricular:
Like I mentioned at the start of the post, it’s been a while since I’ve had to research my meal. I found this article about Lanzhou Beef Noodles insightful.
http://www.chinascenic.com/magazine/lanzhou-beef-noodles-a-nationalized-local-dish-394.html