When I only try one or two items from a restaurant’s menu, I usually visit more than once to figure the eatery and its food out. With Yui, my gut is telling me that the one visit was enough to gauge the place.

It’s a huge compliment to Miku for creating a tasty and beloved sushi dish, the Salmon Oshi Sushi, which now has spawned so many imitators. It’s coming to the point where I think the item is starting to become a common dish in Vancouver.

With Yui being opened by former chefs of the Aburi Restaurant Group, it’s no surprise they have a replicated a perfect copy of the flame seared salmon sushi.

This cheaper clone created a lot of hype on social media and it certainly got my attention. I had a quick lunch with Dennis the Foodie and chowhounder Grayelf, and based on the meal, the publicity is overblown for Yui.

The problem I’m having with the place is beyond the Salmon Oshi Sushi doppelganger, there’s not much else to this tucked away spot.

The posted menu is very short without anything that stands out. However there maybe a secret menu which I don’t understand and will elaborate further later in the post.

I support innovation, commitment to craft, and passion for food. I didn’t get that vibe at my lunch.   I ordered the Yui plate which came with two pieces of the Salmon Oshi knock-off, two pieces of aburi nigiri and a daily fresh roll (a spicy salmon maki roll that day). 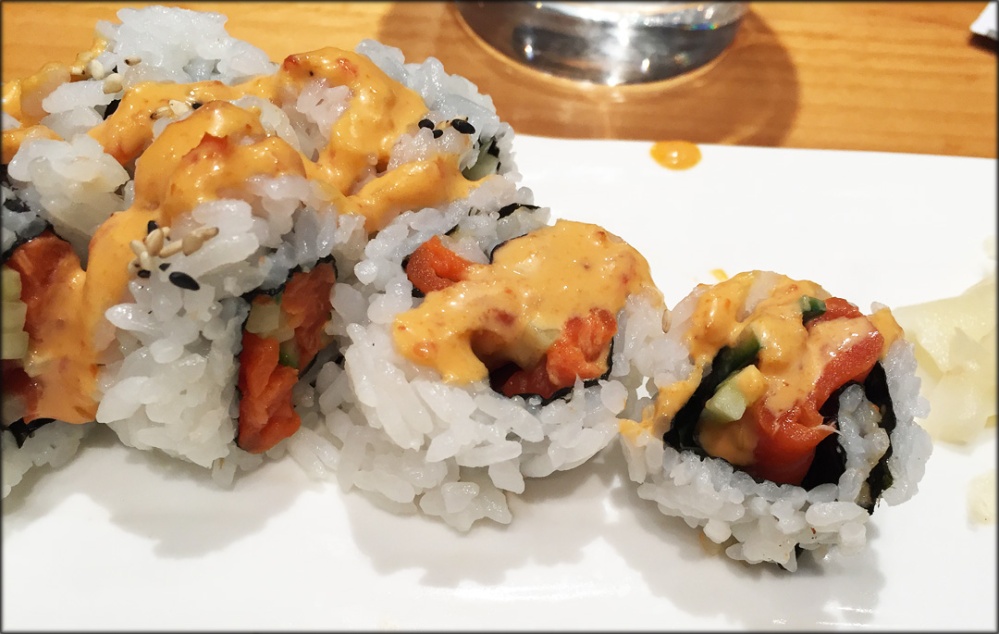 The sushi roll was very sloppily made. The pieces were irregularly cut. The filling was not spread out evenly, which created pieces (probably the end ones) that didn’t have enough salmon in it. 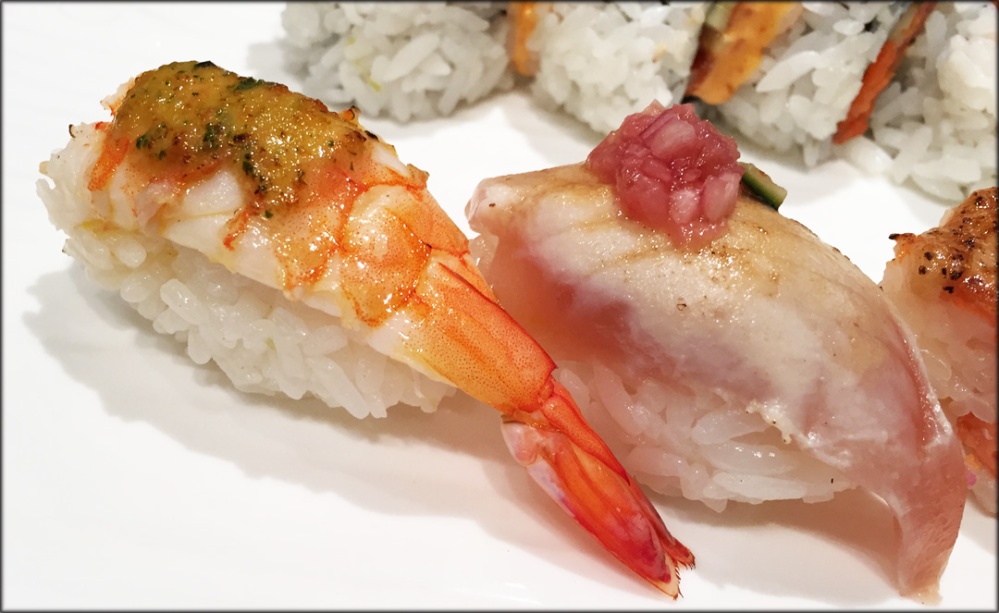 The two flamed nigiri pieces were better prepared but not exactly memorable. I preferred the tart onion topped seared toro over the mayo dabbled ebi. I feel the aburi technique works better on fattier fish since the heat releases more flavour from the fat. Lean seafood on the other hand can get dried out with the torching.

You can read Dennis take on his traditional nigiri plate here. From my perspective, the plate seemed unremarkable. The chef selected premade bright yellow tamago and pretty standard fish with no extra preparation to make the pieces special.

I think the winner of the lunch was Grayelf’s selection of the Oshi plate, which she opted to make it all salmon oshi aburi. If you love Miku’s creation then this is the only reason to come to Yui as they have faithfully created it from appearance, taste, shape, and texture.

Regarding the secret menu, another item we tried was their chicken karaage, which was very good. It was well marinated as the aroma of ginger and soy wafted from the golden brown pieces. Each piece was fairly large and juicy.

We only ordered the item since we saw it on other tables. To be honest for me the chicken was best thing I had at Yui and I can’t understand why it’s not listed on the standard menu.

I feel Yui is a one trick pony. If you like Miku’s Salmon Oshi and want to save six dollars per order, then Yui is your place. However besides the mimic, the rest of the sushi served was serviceable (sort of – that spicy salmon roll was a dud) but not impressive. The food on the dinner menu and other unadvertised items maybe great but my lunch experience didn’t make me want to return to find out.