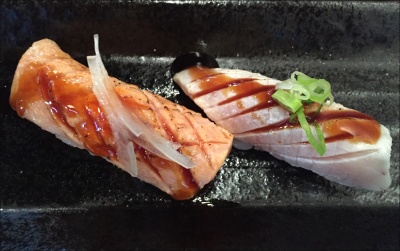 Flamed Nigiri – Yum!
Dual Korokke – Awesome!
Sushimoto – Good!
Sometimes in the frenzy of trying the newest restaurants and the latest trendy foodstuffs in the city, old favourites are neglected.  This was certainly the case with Sushimoto.  In an effort to organize my wallet, I came across a Sushimoto loyalty card and realized I have not eaten there for at least a year.
I was scheduled to have dinner with Speedy but we hadn’t decided on where, when she arrived to pick me up.  In a spooky, we’re on the same wavelength, and this is why we are friends moment, Speedy turns to me and says,  “We’re haven’t been to Sushimoto in ages, wanna go there for dinner tonight?”
So for our monthly catch up dinner, Speedy and I went to Sushimoto to vent about our life and enjoy some sushi.
Sushimoto was one of the first restaurants I reviewed as I started my journey as a food blogger almost 3 years ago.  There have been changes to the décor and the free amuse bouche are no more.  However, the food has maintained a good level of quality.
First to arrive was the Yoshoku item (based on a French croquette), korokke.  This is a favourite of mine at Sushimoto because they serve two kinds of korokke: a potato & corn patty and pure kabocha patty.

Both were crispy on the outside without being greasy.  The potato offering was fluffy but a bit bland.  It definitely needed the okonomiyaki sauce to help perk it up.  In contrast the kabocha korokke was much denser but had a stronger sweet and earthy flavour.  As a result I did not need sauce for the pumpkin korokke.

The assorted sushi arrived next, consisting of a fresh and well-made tuna roll, 5 pieces of nigiri (salmon, tuna, tai, ebi and surf clam), and a creamy and sweet scallop and tobiko gunkan.

The nigiri was on the smaller size but the toothsome unseasoned rice was formed well.   Under each piece of seafood, there was a smear of wasabi.  With the exception of the ebi, which was quite sour, I felt the fish was bland and unremarkable.  The fish used in the nigiri just didn’t standout in terms of flavour.

The 4-piece sea bream (a.k.a Madai) sashimi was presented with alternated thin slices of lemon.  This white fish sashimi was very delicate.  It had a very clean sweet flavour and touch of lemon from the slices.  For fear of overwhelming the flavour of the fish, I ended up eating the entire course without soy or wasabi.
I’m not really a fan of fusion roll as I often find they are sloppily made basic rolls (usually California or Dynamite) with stuff on top.  To add insult to injury, a lot of the rolls also rely too much on mayo and sauce, which masks all other flavours, including the seafood.  With all that said, I did enjoy Sushimoto’s Temtem Roll.
The menu described it as a dynamite roll adorned with veggie tempura and wasabi mayo.  However the “veggie tempura” was more a thin fried fritter of shredded veggies, which was molded to the top of the roll.

Thanks to the inclusion of onion, the fritter was very fragrant but did not overwhelm the prawn in the well made dynamite roll.  The wasabi mayo drizzled over the serving plate was not too over the top.  The Temtem Roll was actually a thoughtfully constructed and delicious fusion roll.
Concluding my meal was the aburi salmon belly and tuna toro nigiri.  Torching fatty fresh fish is almost always going to lead to something tasty and this was no exception at Sushimoto.

Both pieces of fish were melt in your mouth fantastic.  The tuna, topped with green onions was paired with sweet okonomiyaki sauce.  The salmon featuring the slivers of white onions had the okonomiyaki sauce and a small dollop of hot sauce. The sauce helped prevent the nigiri from being too heavy tasting.
With exception of the nigiri in the assorted sushi, my meal at Sushimoto was a delicious success.  Next time I’m in the mood for non-traditional sushi, I’ll have to remember to go back to Sushimoto.
Sushimoto
2221 Holdom Avenue
Burnaby, BC
V5B 3A4
604-293-2201

Sushimoto was using these containers for their soy sauce at each table.  Is this a depiction of Tanuki (Speedy’s best guess)?  If not, what is it?

A personal journal of food and travel